You are here: Home / Executive Team 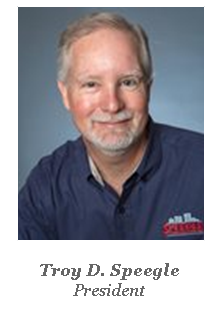 Troy is a third-generation builder who has overseen the dramatic growth of Speegle Construction during the past 23 years. His leadership, innovative style and commitment to client service have led the corporation to become one of the Southeast’s leading Design-Build contractors.
Prior to joining Speegle Construction, Troy was a contracting officer with the General Services Administration with an unlimited warrant, overseeing programs valued in excess of $300M. He has a Master of Arts degree from the University of Texas at Arlington and a Bachelor of Arts from Asbury University.
Troy also is President of BetterBuilt of N.W. Florida and Site & Utility Solutions; both sister companies he founded that specialize in residential and horizontal construction.

Jeff started in 1997 as an office engineer with Speegle and moved quickly through the ranks, serving in the capacity of quality control manager, assistant project manager, senior project manager and Vice President/Director of Operations. He has overseen over $500M in contracts during his tenure at Speegle. Jeff has excelled at Speegle by successfully managing the most difficult projects by finding solutions to problems and maintaining a high level of owner/client satisfaction.
Prior to joining Speegle, Jeff worked for the construction management firm of MK-Ferguson Oak Ridge, a subsidiary company of the Morrison- Knudsen Corporation, who was under contract to the Department of Energy’s Oak Ridge, TN Y-12 facility. Jeff has an A.A.S. in Civil Engineering Technology from Pellissippi State College, Knoxville, TN including numerous certifications he has obtained during his career in construction management. 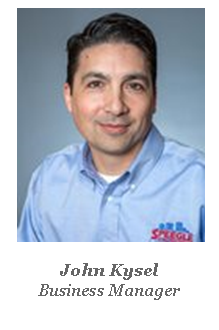 John is the business manager at Speegle Construction, Inc. He has worked for construction companies that specialize in federal contracting since 1999.
He has served as a controller, CFO and vice president at previous construction companies. He brings a unique perspective to the accounting side of the business, having served as both a CFO and a project manager.
John has a Bachelor of Business Administration degree in Accounting from the University of Oklahoma and a Master of Business Administration from Cameron University.

Troy is a fourth-generation builder who joined the Speegle team on a full-time basis in December of 2016. He helps manage the commercial and site utility operations of the Speegle Family of Companies. Troy brings valuable experience from working on the project management and field supervision teams of an ENR Top 25 National Contractor. Prior to joining Speegle, Troy worked throughout the Southeast on projects valued from $10M to $70M+ in market sectors ranging from higher education to aerospace manufacturing to luxury hospitality and advanced technology. Troy also spent time in the Southwestern United States working on the construction management team of a Facebook data center valued at over $250 Million and he directly oversaw $100M worth of work. This project came on the heels of working on the management team of a five-diamond luxury beach resort hotel with a contract value in excess of $50M. Troy’s past success working on a variety of large successful construction projects uniquely qualifies him to help manage and grow the company that has been in his family since the early 1970s. Troy has a Bachelor of Science degree in Business Management from Palm Beach Atlantic University and a Master of Construction Management degree from the University of Florida.